You are using a web browser that may not support the design features on this site.

For the best experience, please switch to another browser. We recommend Chrome or Firefox.

Cobb Family Dentistry has been serving Mableton families since 1978, and our team has been working together for several years. Generations of patients have trusted us for their dental needs, and we are always happy to welcome new and familiar faces to our dental family.

Our dentist, hygienists, technicians, and staff have the education and experience to meet your oral health care needs and goals. We maintain dental care of the highest quality through continuing education and ongoing training in the latest technologies and techniques. Whatever you need, you can count on us to assist you and provide you with the personable and professional dental care you deserve.

Please read our team’s bios to learn more about us.

We look forward to meeting you! 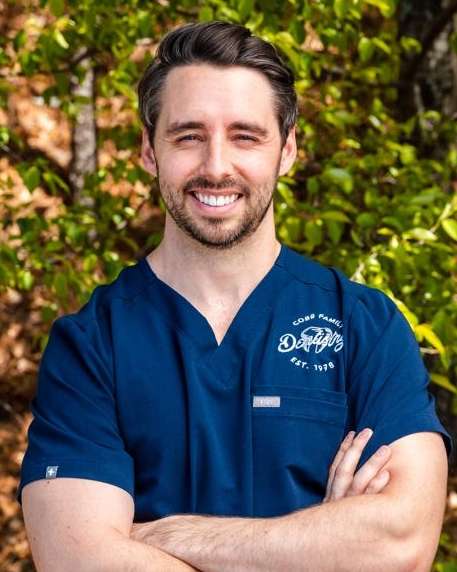 Dr. Reid Popple is a native of Georgia. He grew up in Lilburn, where he went through the Parkview High School system. After graduating, he attended Berry College on a soccer scholarship in Rome, Georgia. Dr. Popple was very involved at Berry. He received multiple Heart of Berry Awards, was a Presidential Ambassador, and was President of the nonprofit Athletes Bettering the Community–a 300+ member organization that focuses on helping the Rome community.

Dr. Popple was captain of the men’s soccer team his senior year. At the end of his senior year, Dr. Popple was selected by the Boy Scouts of America Peach of an Athlete Award, which only selects ten student-athletes from Georgia who demonstrate success in athletics, academics, leadership, and community involvement.

After college, Dr. Popple attended the Medical College of Georgia, where he received a Doctorate in Dental Medicine. He continued his extracurricular involvement where he was the Dentist for Della Co-President–an organization that provides free dental care to Veterans–the ASDA Georgia Chapter Legislative Chair, the SGA Class Representative, the HSDA Fundraising chair, and the ASDA Georgia Chapter Golf Chair. At the end of his senior year, Dr. Popple was inducted into the Alpha Upsilon Phi Honors Society.

Dr. Popple has a passion for dentistry and considers himself a continuing education junky. He averages over 100+ hours of continuing education each year and continually expands his expertise. He loves integrating technology into his treatment plans to streamline processes and provide the highest quality of care.

When he's not treating patients and improving his dental office, Dr. Popple is very active in playing sports and exercising. He is a very active member of Crossfit West Cobb. He lives in Edgewood, Atlanta, with his wife, Dr. Lola Oh (who is also a dentist), and their two dogs, Jed and Bailey. 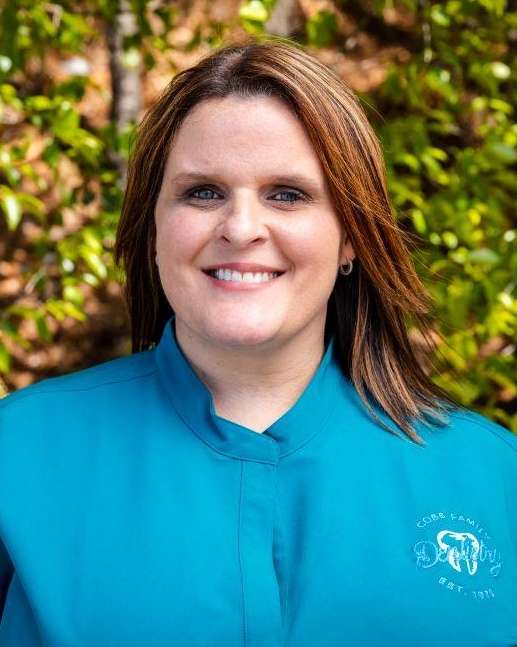 Christy greets patients and makes them feel at home when they visit our dental practice. As the patient coordinator and front desk agent, Christy is usually the first person patients see when they walk into our doors at Cobb Family Dentistry.

Christy received on-the-job training and has been at Cobb Family Dentistry since 1997. For the 25 years she has been here thus far, she has continuously dazzled patients with compassion and kindness.

Christy enjoys making personal connections with patients and their loved ones, and she always strives to make everyone feel at home by offering friendly and professional assistance.

She organizes the schedule as the patient coordinator and helps patients understand their treatment plans and insurance. Christy has a background in dental assisting, so she can lend a hand with procedures when needed.

Her favorite pastime is spending the weekends with her kids and grandkids. 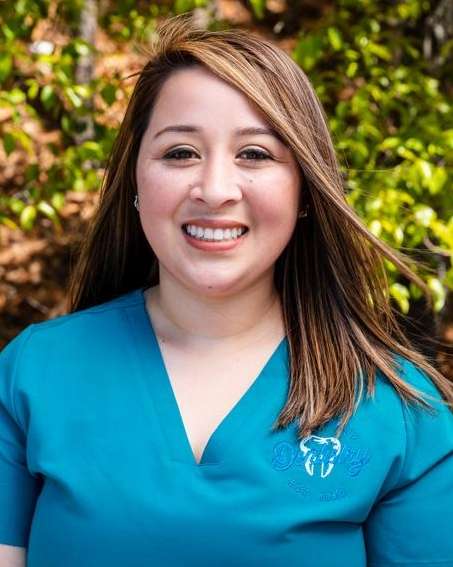 Jessica is a dental assistant who started at Cobb Family Dentistry in 2012 and trained at West Georgia Technical College. Jessica is passionate about dental care and ensuring each patient has a pleasant and positive experience. Her favorite aspect of dental care is helping patients achieve their oral health goals.

Jessica and her husband are busy swooning over their newborn, and they can’t wait for all the milestones and special memories they’ll create with their little one. 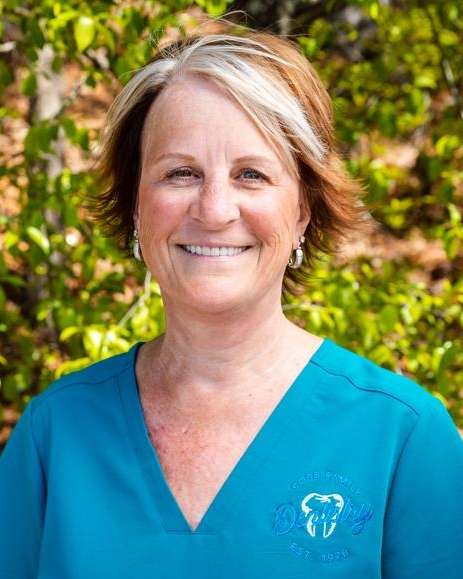 Teresa is our multi-talented office manager who has been part of the Cobb Family Dentistry team since 1994. She ensures the office runs efficiently, so our patients receive the best possible care. Teresa loves welcoming patients to our office, and she’s grateful to work with a passionate, committed team that creates a comfortable and happy environment.

Teresa and her husband spend much of their free time with their children and grandchildren. 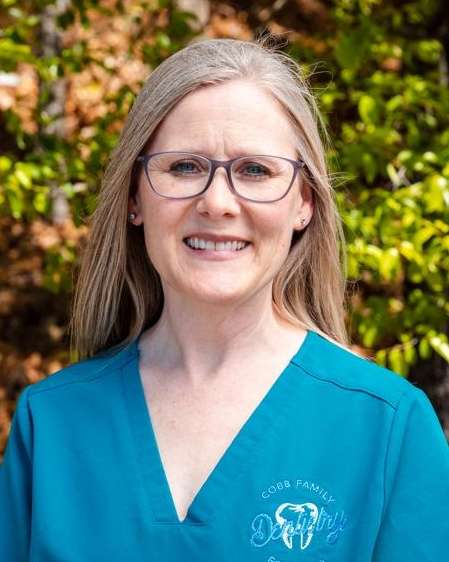 Kelley has been a dental hygienist since 1995 and has been on the Cobb Family Dentistry team since 2000. She earned her training from Dekalb College, currently Georgia Perimeter College. She loves meeting new patients and encouraging them to have healthy mouths and bodies through good oral hygiene.

Kelley has three boys and a husband that keeps her very busy during the week and weekends. 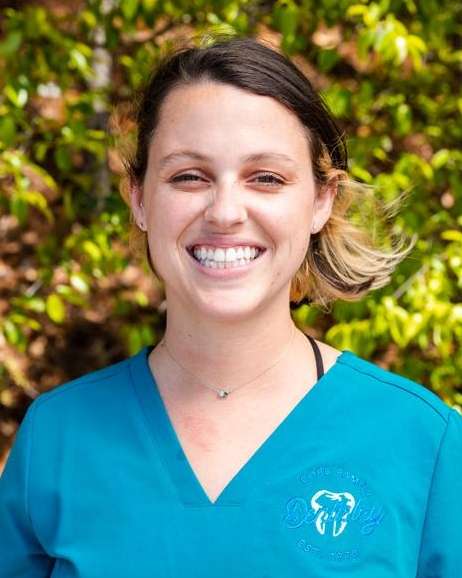 Hannah has been a dental hygienist since 2017 and part of the Cobb Family Dentistry team since 2019. Her favorite things about being a hygienist are building relationships and helping patients discover their healthiest, most confident smiles.

Hannah and her husband are proud pet parents and enjoy spending their weekends together lounging around the house or wandering around town. 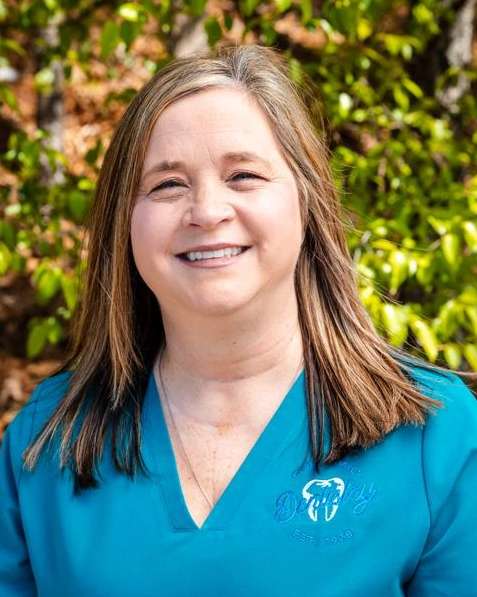 Shelly has been dental assisting since 1993 and has been a valued member of Cobb Family Dentistry since 2009. She received her training at our dental practice, and she loves seeing patients’ excitement when our team helps them with their smiles.

Shelly especially enjoys when a nervous patient overcomes their fear of the dentist and learns how life-enhancing great dental care can be.

A home improvement and interior enthusiast, Shelly is constantly finding new ways to make her home more comfortable and inviting for her loved ones. On weekends, you may also find her relaxing by the pool with a good book or spending time with her husband, children, and grandkids. 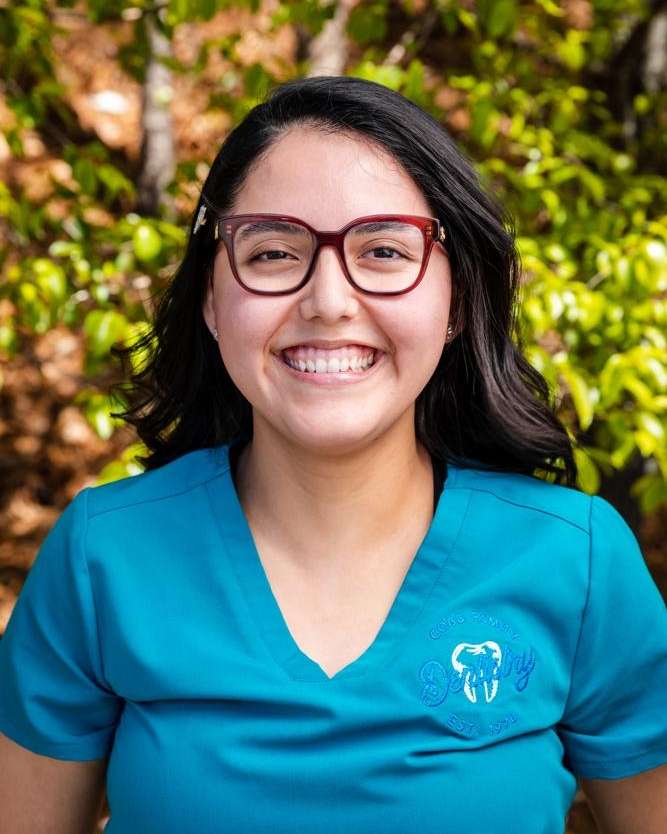 Karen has worked in many areas of dentistry since 2018, including pediatric and general. It is Karen’s job to assist Dr. Popple in all aspects of patient appointments, from assisting with procedures to making sure each patient is comfortable and well-cared for. She also gathers and charts vital information during the appointment as Dr. Popple performs the exam.

When Karen is away from the dental office, you will most often find her spending valuable time with family and friends.

A Healthy Smile Is Just a Click Away!
Request an Appointment
Leave a Google Review
If you have difficulty using our website, please email us or call us at (770) 944-8620